Illuminating the Legacy of Slavery in Bristol, Rhode Island 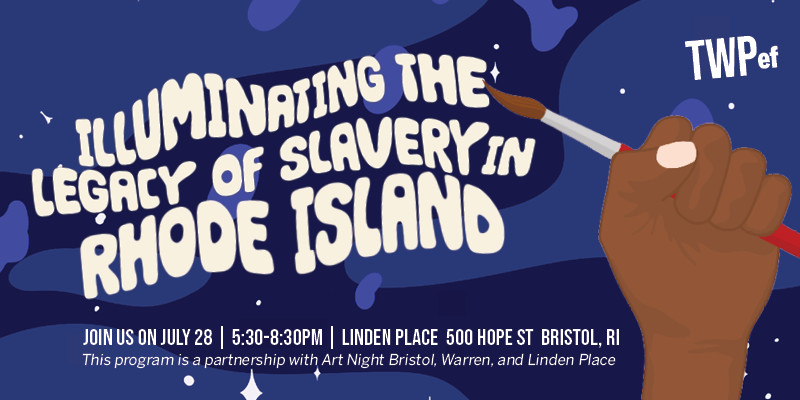 Illuminating the Legacy of Slavery in Bristol RI, for Art Night Bristol Warren

The Womxn Project Education Fund (TWPEF) will create a series of site-specific installations for Art Night Bristol Warren, that serve to Illuminate the Legacy of Slavery in Bristol. These art installations are a continuation of our ongoing statewide program, Illuminating the Legacy of Slavery in Rhode Island. Having focused on histories of enslavement and resistance in Cranston, Providence and Woonsocket, we will partner with Linden Place and Art Night Bristol Warren to shine a light on the legacy of slavery in Bristol, Rhode Island. 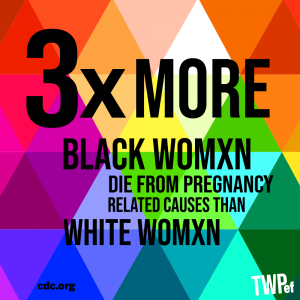 A banner designed by Jocelyn Foye will evoke the damage caused, when powerful forces control human bodies, historically and today.  Attendees are invited to grab a paint brush and help bring this colorful banner to life.

Susie Chakmakian (standing in for Tammy Brown) and Daria-Lyric Montaquila will read aloud each name listed on A Timeline of Enslavement in Bristol, a project of the Bristol Historical and Preservation Society recognizing each enslaved person who has been identified as having lived in the town of Bristol.

Lois Harada continues her ongoing partnership with TWPEF through her video, In this Place. By depicting the raw materials that fueled the Triangle Trade, the viewer is asked to envision the labor and hardship of enslaved people, which transformed those materials into the wealth of the DeWolf family.

Lois Harada Statement:
Linden Place was built in 1810 by George DeWolf, a prominent figure in Rhode Island&#39;s
trade of enslaved people. New England is often thought of as far less complicit in the
economy of slavery than southern states, though the truth is that the region benefited
greatly. Rhode Island was an epicenter of the transatlantic slave trade not only through
its massive ship building industry, but also through textile mills that turned imported
cotton into slave cloth used throughout the South. The DeWolf family also profited from
sugar and coffee plantations in Cuba that were worked by enslaved peoples. In This
Place uses imagery of cotton, sugarcane, and coffee to reflect upon the birth of Linden
Place from the DeWolf&#39;s benefit and enablement of the Triangle Trade.

Jocelyn Foye is the Co-Founder and Director of The Womxn Project and the Co-Founder and Chair of the Womxn Project Education Fund. A Connecticut native, she brings her artistic training and experience as a contemporary feminist sculptor and design professor to the social justice movement.  Jocelyn was a recipient of the 2014 NEA and City of Long Beach, CA Arts Grant and the prestigious Emerging Visual Artist fellow with the California Community Foundation, having lived there for thirteen years before coming back to New England.

Susie Chakmakian (she/her) is honored to work alongside The Womxn Project on this project. Earlier this year, she premiered There Was And There Was Not, her original one-woman show about the Armenian-American experience, at the Contemporary Theater Company (CTC). Past credits include Ash/Garnet in Bethel Park Falls (CTC), Lili in Fools of Another Nature (CTC), Speed in The Two Gentlemen of Verona (CTC), Puck in A Midsummer Night's Dream (CTC), and Celia in As You Like It (Head Trick Theatre). She is currently performing in As You Like It (again!), this time in the role Touchstone and at the CTC.

Daria-Lyric Montaquila (she/her) is a communicator and advocate for a range of intersecting social issues, with a background in theater and community organizing. She is an artist and an advocate who believes that art and storytelling are a powerful tool to highlight a host of issues such as reproductive justice, racial justice, and gender, housing, and economic equity. Daria attended the University of Rhode Island where she graduated summa cum laude in 2018. She has a bachelor’s degree in acting and uses her education to deepen the relationship between storytelling and advocacy. When she is not advocating for social justice, she can be found on stage in a diverse range of productions or spending time building community.

Lois Harada is an artist and printmaker working in Providence. She studied printmaking at the Rhode Island School of Design (RISD) and settled in Rhode Island after graduating with a Bachelor of Fine Arts in 2010. She works at DWRI Letterpress, a commercial letterpress printshop where she also prints her own work. Harada utilizes text and the medium of the poster to tell her family’s story of incarceration — her paternal grandmother was interned in Poston, Arizona from 1942 -1945. She takes inspiration from propaganda printed and distributed by the United States government and prints with type and equipment similar to that which would have created the original works. Harada has exhibited her work across the United States and internationally. Her work is included in private collections as well as the RISD Museum. Her practice is bolstered by residencies and she is preparing for a five-week residency at Anderson Ranch in Colorado in the spring of 2022. She recently finished a seven year term on the board of New Urban Arts, a nationally recognized free, arts drop-in program and a term as a city commissioner on the Art in City Life Commission serving the city of Providence.
https://www.loisharada.com/
https://www.instagram.com/loisharada/

Thank you to Pneuhaus for their generous help in creating the banners for our community banner painting project!

Illuminating the Legacy of Slavery in RI Research & Resources

About the accessibility of this event:

Outdoor public art interventions are accessible to anyone who passes by on the street. Live streaming the events expands that audience to people who are homebound or who lack transportation. TWPEF interventions are relaxed performances, meaning that there are no strict expectations or codes for audience behavior, making the experience accessible to audience members who may feel intimidated or constrained in formal performance spaces. Audience members are welcome to make noise and come and go as necessary. The spoken word portion of the program will also be presented in readable text.